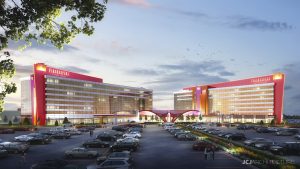 FireKeepers Grand Opening will feature King of the High Wire

The newly completed expansion to the FireKeepers Casino in Battle Creek, MI, will have its grand opening Aug. 16. The ceremony will include a performance by renowned daredevil Nik Wallenda, known as King of the High Wire, who will walk a span of more than 400 feet on a high wire from the hotel’s existing tower to the new expansion, nearly 200 feet above ground.

Learn more about the grand opening and read more about IMEG’s involvement.