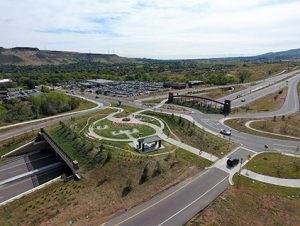 The City of Golden’s new Linking Lookout, a project re-connecting the city’s east and west neighborhoods separated by U.S. Highway 6, will receive a 2019 National ACEC Excellence in Engineering Grand Award May 7 in Washington, D.C. It also will compete with 15 other projects for ACEC’s highest honor, the Grand Conceptor Award, to be announced at the ceremony.

IMEG collaborated with the City of Golden and Kraemer North America to provide civil engineering design and services for Linking Lookout. The design and construction team developed a plan to construct a grade separation between U.S. 6 and its intersection with 19th Street, complete with a “lid” – an earthen pedestrian plaza with native grass, trees, paved walking and bike trails, and a vehicle roundabout – providing easy access and a “link” between both neighborhoods and nearby Lookout Mountain.

IMEG engineers and staff provided drainage, utility, and roundabout design, as well as surveying and project management services for the $25 million project. The firm worked closely with the City and contractor to develop the design and attended community meetings to discuss the plans with the public and receive their feedback.

Construction was phased so that traffic could continue to flow. Phase I of the project consisted of the construction of ramps between U.S. 6 and 19th Street. Phase II included detouring highway traffic via the ramps, excavation of the existing highway to lower its grade, and constructing the bridge, overhead plaza, and roundabout elements of the lid. Phase III completed excavation and mainline paving, and Phase IV added landscaping and park elements.

Because the lid contains soil and is irrigated, a special drainage board – made of a plastic back with raised dimples covered with a filter fabric – was used to convey water safely off the deck and prevent freeze-thaw and rust issues. Innovative materials were used to create berms to mitigate traffic noise and minimize weight on the lid. The design also included a dense Styrofoam core covered with a waterproofing material for the large berms, and the entire bridge deck was covered with a lightweight engineered soil called “magic dirt” to create the park.