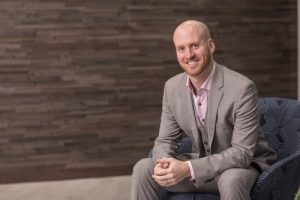 IMEG Principal and Client Executive John Costello has been named one of ENR’s 2022 National Top 20 Under 40. The program honors the best of the next generation of construction industry professionals across 10 regions.

ENR’s National Top 20 Under 40 were selected out of nearly 400 entries received this summer during the regional Top Young Professionals competition. Nominees in the competition represent all parts of the construction industry and came from all 50 states, Washington, D.C., and Puerto Rico. John advanced to the national level after having been the highest-scoring recipient named to ENR Midwest’s Top Young Professionals.

John works out of IMEG’s Minneapolis office, overseeing client operations and development for Minnesota. In addition to being a licensed Professional Engineer, he is LEED AP BD+C and WELL AP accredited and is certified by ASHRAE as a Building Energy Modeling Professional. His profile will be featured along with other winners in ENR magazine in early 2022.

Read more about the Top 20 Under 40 contest.