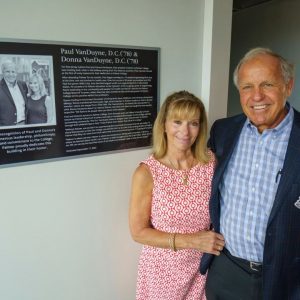 Paul and Donna VanDuyne will be honored as the Outstanding Charitable Family in the Quad Cities for their support of Palmer College of Chiropractic in Davenport, Iowa.

The IMEG President and CEO and his wife will receive the award at the Quad Cities Association of Fundraising Professionals’ (AFP) National Philanthropy Day Level Up Conference and Awards Luncheon on Nov. 16 at Bally’s Casino and Hotel, Rock Island.

The Outstanding Charitable Family award is one of AFP’s highest honors, given to a family who has “made a monumental impact in the community through its support of local nonprofit organizations,” according to its website.

Palmer College of Chiropractic named its new student housing complex in honor of the couple, who met while students there in the 1970s and are co-chairs of the college’s $25-million Daring and Driven fundraising campaign, to which they donated $2.5 million. Approximately $20.5 million has been raised in the last five years.

The funds have been used to help develop five new buildings on the college’s Davenport campus, and one on the Port Orange, Fla., campus.