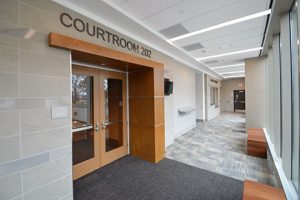 The new annex features four new courtrooms for the 14th Judicial Circuit Court of Illinois and allows the court to function more efficiently. Of the four courtrooms, two are for traffic court, one for civil hearings, and one for domestic violence. Other spaces in the three-story, 47,954-sf facility include offices for the state’s attorney and circuit clerk, judges’ chambers, waiting rooms, a law library, and administration offices for the judicial system.