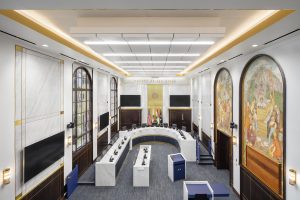 Note: The advanced AV design on the following project added full, high-quality audio and video remote conferencing, which has been utilized extensively during COVID-19. County commissioners, staff and the public can attend any meeting from a remote computer and be heard in the boardroom and on all other remote attendees’ computers as well.

IMEG was recently involved in what I consider a benchmark project for the audio-visual industry – one that illustrates the benefits of not only having technology designers involved from the very beginning, but also having AV engineers with acoustic qualifications rise to the occasion and lead the design.

The project was a renovation of the historic art deco council chambers inside the San Diego County Administration Center. The 1980s-style boardroom offers stunning bayside views through large arched windows but had obscured the scene with heavy floor-to-ceiling drapes (the original thinking being that acoustics is defined by dead, dry absorption). AV gear was arbitrary, undersized, and without proper sightline for most viewers; a “studio style” presentation was broadcast via analog cable to thousands of people from numerous municipal groups.

The renovation was, for all intents and purposes, a two-year AV project. But while the design completely updated the space it also created two major acoustic and AV challenges:

These challenges made the integration of AV and acoustics to be of primary importance, leading the owner to choose the technology and acoustics consultant – IMEG – to be the prime designer on the project. (IMEG also provided mechanical and electrical design.) Project success, however, required all programming to be integrated through a team approach – not siloed among different firms or separated scopes – to balance strong technology and mechanicals that optimized noise control with architecture.

From the very beginning, our team worked collaboratively with the highly engaged, open-minded architect (who also had strong design interests) to meet stakeholder goals. The project followed the mantra that AV products are never AV solutions and placed utmost importance on the integration and balance of the “whole house” of systems – architectural, mechanical, electrical, and lighting – with noise control and AV technology design in the driver’s seat. (Watch a time-lapse video to see the project from beginning to end.)

As the project began, AV software programming became central to the overall design and was guided by the various perspectives and wide-ranging needs of the chamber’s many users. IMEG worked closely with the owner’s representative, who diligently helped our team understand the client’s culture and the uses of the space, as well as guard the owner’s mandate of “simple to use.” (Many long nights were expended to ensure the installation team understood the mandate, too.)

The owner needed a user-friendly, accessible, yet sophisticated control point with hundreds of choices designed in. This took months to refine and vet between owner groups. An easy-to-operate conference discussion mic system also needed to be tailored for the group, so IMEG’s acoustics engineers mandated a simple “push the button to talk” approach for all microphones to limit the number of mics used at once. Software allowed this fundamental, but the devil was in the details (including taming and tuning acoustics for this to work).

The A/V systems were optimized over several months to iron out these details. People needed to be heard from far away and without a public address system, as natural communication and collaboration were desired. The design included speaker coverage and clarity mapping, as well as extensive architectural integration including marble for reflection and support surfaces. Window shades had to have absorption value and floors had to be damped. The ceilings had to be diffusing, absorptive, and reflective to support a large council. A “wave in motion” acoustical ceiling for speech diffusion was custom designed to echo the west coast aesthetic. Perforated wood walls provided additional noise control.

The project would not be successful, however, without training for the owner’s staff, documentation, and software updating – items often taken for granted as “sure … but only maybe” on so many projects where AV and technology are typically pushed off to the end or never finished (this does happen!). This project, however, embraced these technical aspects and made them a priority. (Just ask the AV subcontractor, whose punch list was far longer than they expected.)

The renovation of the San Diego County Administration Center council chambers was a resounding success and was completed on time and within budget due to the collaboration of all.

Having the rare opportunity to lead such a multi-discipline project as a prime AV engineer allowed us to integrate technology from the beginning and meet all stakeholders’ goals – from architecture to infrastructure – with the owner receiving a proudly renovated space served by the one proverbial AV “On” button.

Watch a time-lapse video of the project. 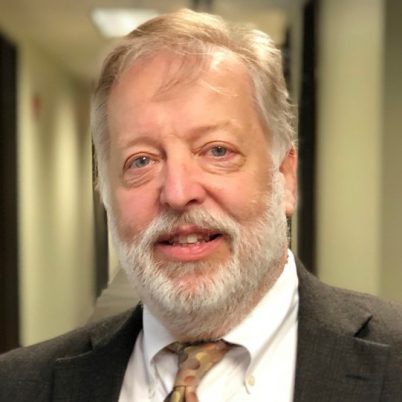 Delegated design in building technology can have costly consequences

Podcast | 3-2-1: How commercialization launched IMEG into the aerospace industry